Question: What Is Goodlettsville TN Most Famous For?

Answer: Goodlettsville is a town in Tennessee. It was named for a very large and prominent family who made their home there in the 18 th century. The population was 2128 in 2010. Goodlettsville got its start as a small farming community in the mid-to-late 1700s, but it did not begin to grow until the federal government selected the site for a regional center of operations during the war of 1812. Ft. Wright was built and several wells were dug to supply water for soldiers’ baths and the fire pump.

Downtown Goodlettsville thrived centered on the depot for more than a century. Then the highway system was constructed in the 1960s, and many downtown businesses followed customers outside of town to the new suburbs. Today, however, business owners are making a commitment to returning downtown businesses to their glory days. With its unique identity that includes antique shops, crafts stores, specialty coffee and tea shops, retail stores and restaurants, Downtown Goodlettsville is taking shape as one of Middle Tennessee’s hottest destinations for visitors and locals alike.

Incredible, gentlemen's farm approx 20 mins to Dtown Nashville. It is 28.2 gorgeous acres with huge mature trees and a 1910 farmhouse (in need of major renovation but great bones with quite a few of the original details). 3 bdr/2 bth beauty with 2, 4

Follow the 1000 feet of fenced road frontage and open the gate to a breathtaking custom built home on 16.72 acres. Enjoy unmatched peace and solitude on the rocking chair front porch only 17 miles from downtown Nashville. Amazing comfort and hosting

Private wooded setting, convienant to I-24 & I-65 .Great property for a growing family ! Pool with pool house includes a full bath with a kitchenette .Relax on over 700 square feet of covered porches !3 car garage.Lots of storage with an outdoor stor

If you are looking for privacy this home has it. It sits on 5 acres with a tennis court and a salt water swimming pool that has a new epoxy finish, resurfaced in 2021. The home has a full basement that has unlimited potential. The home is ready for i

** This one's back - buyer financing fell through! ** Come out and see this beautiful home in the Woodwyn Hills community in lovely Goodlettsville! Featuring granite countertops, tile backsplash in the kitchen, and tall hardwood cabinets. You’ll love

This Goodlettsville one-story home offers a patio, granite countertops, and a two-car garage.

Beautifully renovated ranch home with many outdoor entertainment options. This quiet neighborhood offers the benefits of city living while giving you the oasis you always wanted. Lots of storage options. Minutes to I-65, Nashville and shopping. New r

Back on the market! This charming 2BR, 1BA home sits on 12.5 gorgeous, green acres. The house is homey&spacious. Owners recently put on a metal roof on that has a transferable 50yr Warranty. Beautiful stone fireplace, Granite Countertops, Stainless S

This long, low, and luscious ranch style home has been well maintained and cared for inside and out! Located approximately one quarter of a mile from I-65! Only minutes to restaurants, grocery stores, churches & more... Sitting pretty on a corner lot

Incredible setting atop Brick Church Pk! Escape to the QUIET beauty of rural Goodlettsville- enjoy the existing home or build your dream home. Lot is 10.36 acres with part level, open land along with timbered, sloped land. Storage structures in place

OPEN HOUSE Sunday 05/22 from 2-4pm. GREAT LOCATION....only 15 mins to Downtown Nashville and 20 mins to Nashville Airport. Easy access to interstate 65, 3 mins. Close to Lakes and boat ramps. Plenty of privacy with this wonderful home sitting on 8/10

*INVESTOR SPECIAL! Don't miss out on this great piece of Davidson Co. in Goodlettsville, on over 3 1/2 Acres! Home is selling "As-Is". Wonderful piece of property loaded with detached 2 car garage, and carport. Addition already added in back of home,

*Ask your realtor for additional info sheet prior to showing* Retreat to this stunning 4 bed | 3 bath home in Goodlettsville tucked away on over 2 acres - a rare find! This private oasis is nestled in the trees yet just 25 minutes from Nashville. Tru

Lots of Potential, Private setting, nothing can be built behind you.Home being sold '"AS IS" Beautiful Mature trees.Full basement.New kitchen cabinets.

MULTIPLE OFFER RECEIVED. Just like new! Wonderful renovation on dead end street, backing up to Peay Park and less than 20 minutes to downtown Nashville. A stones throw from Goodlettsville shops and restaurants. Great starter home with an ideal floorp

Roof and Water heater are less than 2 yrs old. HOA- Metropolitan Property Management 615-915-3204 Move in ready home with granite countertops and separate dining area, living room with fireplace, covered back patio and fenced in yard. Home can be use

Investor Special! House has already been gutted to the studs, ready for any flipper to come in and make it their own! There will be an offer deadline of 5/1/22 on this property, seller reserves the right to accept an offer at any time, please contact 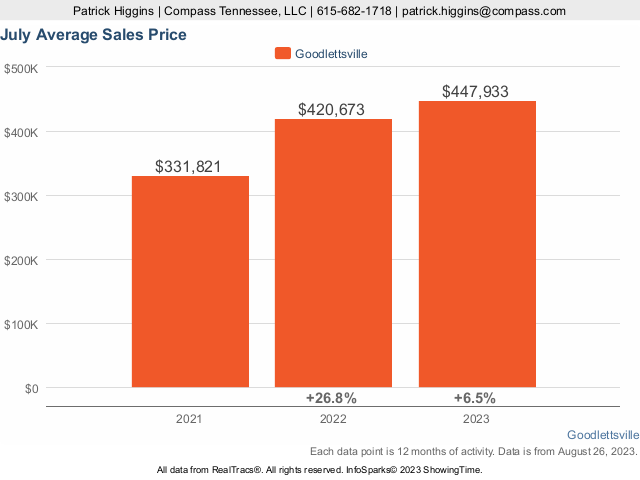