Question: What Is Spring Hill TN Most Famous For?

Answer: The Cherokee, Chickasaw, and Shawnee hunted on the land known as Spring Hill. The land around Spring Hill is rich was a natural attraction to wildlife and Native Americans. Settlers coming with land grants for western expansion valued the beauty and fertility of the rolling hills and natural springs. Early settlers venturing out into the west had a strong faith in the land and the future community. Soon, the community was complete with churches, schools, doctors, lawyers, blacksmiths, and merchants

The Battle of Spring Hill – November 29, 1864
Spring Hill was the prelude to the Battle of Franklin. On the night of November 28, 1864, General John Bell Hood’s Army of Tennessee marched toward Spring Hill to get astride Major General John M. Schofield’s Union army’s life line. Cavalry skirmishing between Brigadier General James H. Wilson’s Union cavalry and Major General Nathan Bedford Forrest’s Confederate troopers continued throughout the day as the Confederates advanced.

Equestrian Estate conveniently located just off Saturn Parkway between Port royal and Hwy 431. You have the beauty of the country and the accessibility of the city. There is plenty of room for Horses and Livestock on the 26+/- acre. The property has

ENTERTAINER'S DREAM HOME located in S.Williamson Cty TN. This Beautiful home sits on 5 Private acres (2 fenced, 2 woods, 1field). Large circular driveway leads you to a magnificent portico entry to the Main Home. As you enter this home you will walk

Impeccable custom home on best lot in Autumn Ridge.Greet your family and friends as they arrive on the circular drive! The handsome Entry with arched door sets the stage for perfection!Gracious Foyer is flanked by Library w/custom built-ins , & Dinin

Beautiful Farm House plan with a 3 car Garage with 2 beds down, 2 beds up with a Bonus Room 2nd bedroom down would make great office space. Oversized and vaulted back covered porch with 2nd fireplace. Sand and finished hardwood floors, fabulous chef'

ONE OF A KIND LAKE HOME IN SPRING HILL! Imagine your evenings spent on the back deck overlooking peaceful Big Oak Lake! This amazing home on over 2 acres has something for everyone! ALL BEDROOMS are on 1 floor with an easy step in transition from the

First time on the market, Builders Custom Home with Park Like Setting that has double insulation, a maintenance free deck and Sunroom. Mini-Farm containing a Barn with concrete floors (72x24) and a Pole Barn (24x16). Apartment/In Law Suite downstairs

Wonderful Cumberland Plan by Landmark Building Company. Very versatile living with 3 bedrooms, 2 baths down and 2 bedrooms 1 bath up. 3/4" sanded and finished hardwoods down...even in all bedrooms down. Beautiful millwork and attention to detail. Ope

WELCOME TO THE COVE - AN ALL BRICK HOME COMUNITY IN POPULAR SPRING HILL. THIS 4 CAR GARAGE HOME HAS 3 BEDROOMS ON THE MAIN FLOOR - 1 COULD BE USED AS AN OFFICE. SHAW HOMES FEATURE LOTS OF UPGRADES INCLUDING CUSTOM HAND MADE CABINETS, SS APPLIANCES AN

ALL BRICK 3 CAR SIDE LOAD GARAGE COMMUNITY - 3 B/R ON THE MAIN FLOOR-1 B/R SET UP AS AN OFFICE-CUSTOM CABINETS THRU OUT-GRANITE ON ALL COUNTER TOPS, OPEN FLOOR PLAN-COVERED BACK PORCH- 4th AND 5th BEDROOM AND BONUS UP. REAL SANDED AND FINISHED H/W FL

This picturesque home is situated in the up & coming Spring Hill. The warm entry into this home highlights the soaring ceilings, stunning hardwood floors and modern open-concept floorplan. The main level features a formal dining room topped w/ a coff

Breathtaking Custom Home. Home could be utilized as a 4 bedroom home with 2 bonus rooms, or one of the bonus rooms could be a 5th bedroom w/armoire. Screened Sun-room. Large media room w/huge wet bar. Beautiful landscaping and plantings. HVAC's are 1

No HOA! In the country but 5 minutes from town! Custom built beautiful home with easy access to Saturn Pkwy and 840. Solid surface counter tops in kitchen. Hardwood floors cover most of the home . Enjoy the large front porch or the large patio AND de

This stunning property boast an all brick home with acreage in the heart of Spring Hill and a short commute to Nashville. Your going to love the space and all it has to offer . Property is fenced and cross fenced with storage shed/barn. The home itse

Highly Sought After "The Arbors at Autumn Ridge" This custom all brick home has been well cared for and features loads of upgrades, professional landscaping for privacy, irrigation system with sod installed front, back, and sides. Two Bedrooms Downst

Dalamar Affordable Custom Homes presents the "Sea Breeze" floor plan. This home has been fully designed by our design team and comes loaded with custom upgrades!!! ALL 3 Bedrooms, a Large Dining, Open Great Room and Kitchen located on the main level.

Rare Fully Finished Basement Home in one of Spring Hill’s favorite communities, Cherry Grove Addition. Perfect for entertaining & room for everyone! The finished walk out basement has a separate bath and bedroom and living space which makes it the pe

ONLY 8 OPPORTUNITIES REMAINING! Amazing opportunity to own a brand new Dunwoody Way in the beautiful Southern Springs Del Webb active adult 55+ community. This home is FULL of great upgrades. You will enjoy a MASSIVE walk in shower complete with rain

Welcome to the Williamson Co side of Port Royal Estates! This home has over 3, 000 sq ft of open living space, has one of the largest lots in the neighborhood and has had only 1 owner! Easy access to I-65 and all shopping in Spring Hill. Backs up to

Wonderful Nest 2 Plan (Elevation A) by Clark Custom Homes. Primarily one-level living with an additional bed, bath and bonus up. Attention to detail throughout! Tray ceiling in master. Double vanity and inviting, stand-alone tub and separate shower i

Lovely four-bedroom two bath home that is well cared for and offers lots of privacy. Fourth bedroom presently used as Bonus Room. Fully fenced backyard. Backs up to common area that is lined with majestic trees that give shade to deer and other anima

MOTIVATED!!! STUNNING and SPACIOUS!!! TONS of square footage!!! This beautiful home is in the perfect location in a desired neighborhood. Has 4 bedrooms AND TWO LARGE BONUS ROOMS (one could even be a large 5th bedroom and other with beautiful custom

Phillips Builders- The Fleetwood - This one of a kind home offers gorgeous designer features, including a gourmet kitchen, covered deck, fireplace, quartz countertops, trendy tile and more! The main level has versatility with 2 beds down plus an offi

Looking for LOCATION along w/ SECLUSION w/the PERKS of Being Close to Shops/Restaurants and More. Here it is! This Open Floor Plan Home Rests on 9+ Acres - 3 Beds/2 Bath - Beautiful Great/Sun Room (added in 2004) w/many Windows to Bring in the Natura

Amazing home located in desired Benevento neighborhood. Primary Bed down, Fenced in back yard that backs up to green space, quartz kitchen counters with Gas cooktop, Stainless Steel appliances, front room could be used as formal LR, dining room or of

Great opportunity to purchase a 5 Bedroom 4 bath brick home in Benevento. The property will require a cash buyer due to a title issue with the property.

Wonderful Elevation A Haven Plan by Clark Custom Homes. Primarily one-level living with an additional bed, bath and bonus up. Attention to detail throughout! Tray ceiling in master. Double vanity and inviting, stand-alone tub and separate shower in m

Awesome home on cul de sac great yard backs up to tree line. Has a large loft and a huge bonus room that could be used as extra bedrooms .Beautiful gourmet kitchen with large island, has a beautiful 2 story stone fireplace floor to ceiling.Open floor

Crescent Home's AVONDALE B . FINAL BEST SELLING COTTAGE HOME - HUGE CORNER LOT W/ 3 CAR GARAGE BACKING UP TO GUEST PARKING AREA. This Southern Charmer checks all the boxes. THE INTERIOR DESIGNER REALLY HIT IT OUT OF THE BALLPARK ON THIS ONE. Large Va 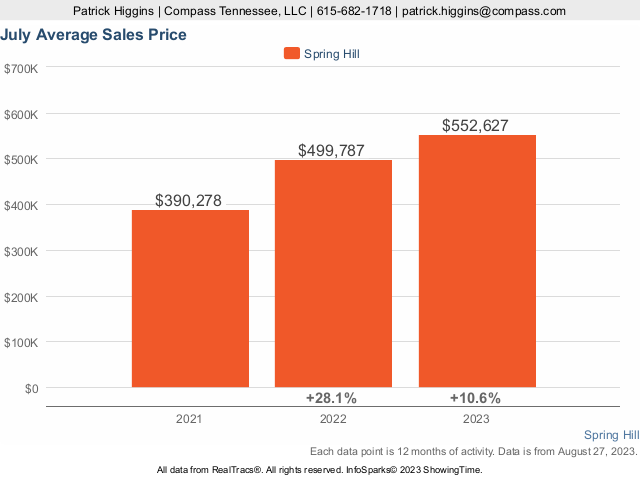 Tell Us What You Are Looking For In Spring Hill