Question: What Is Fairview TN Most Famous For?

Answer: The City of Fairview is officially just 60 years old, but its history started long before.

The area was first inhabited by Native Americans who traveled the ancient Natchez Trace trail which runs just a few miles from city’s heart. Due to the remote nature of western Williamson County, early residents were independent and self-reliant as compared to Franklin and communities to the east. The opening of Hwys. 100, 96 and 96 West and Interstate 40 all led to the area’s steady growth.

Nice 2 story with master upstairs. Large 1st floor with a huge wooded lot and yard. Beautiful kitchen with Granite. A patio on the back makes for a perfect evening.

4.5 acres in the heart of Fairview. Currently zoned residential but can be rezoned commercial. Seller will assist in rezoning. Hilltop views. Property fronts Hwy 100. Multiple possibilities. 2, 000+ SqFt house and 2, 000+ SqFt building on the propert

2 story with possible bedroom on 1st floor. Open kitchen and great room. Master bedroom up with 2 other bedrooms and a Loft. 2 car front load garage on a spacious lot.

Gorgeous lot in Fairview with lots of potential. Close to town and all the amenities. Build a dream home or use recreationally while your investment grows.

3 Bedroom/2 Bath home, beautiful flooring and color combination. All new energy star appliances, matching outdoor shed and builder 1 year warranty! This one is a must see to appreciate. Taxes are an estimate only. ALL information to be verified by bu

Charming cul-de-sac home is MOVE IN READY! Featuring a large open living space, kitchen with an abundance of storage, upgraded SS appliances and pantry! Sunroom just off of dinning space overlooks private back yard. All bedroom are located on 2nd lev

Check out this amazing home in an amazing neighborhood. This home features fresh paint, spacious floorplan, finished basement, private deck and patio, large yard, and so much more. The home is located near shopping, dining and is a short commute to N

GET IT WHILE YOU CAN! Level to rolling 2.47 Acres with 130 feet of Highway 96 - a little over a mile from I-40 Exit 182! Residential with COMMERCIAL potential. SURVEYED! PERKED in 90's. NO DEED RESTRICTIONS! Can be surveyed into 1 Acre Lots if needed

2.79 Acres on Highway 96 - a little over a mile from I-40 Exit 182! LEVEL to rolling acreage with residential zonig but has potential to be COMMERCIAL. ROAD FRONTAGE is 163 feet! Small CREEK runs through the front of property. SURVEYED! PERKED in 90'

5.26 Acres on HIGHWAY 96 - a little over a MILE from I-40 Exit 182! LEVEL to rolling acreage!RESIDENTIAL or COMMERCIAL potential. Road FRONTAGE is 300 feet! SURVEYED! Electricity, Water, Sewer and gas along road. PERKED in the 90's. NO RESTRICTIONS!

Four bedroom 2.5 baths with formal dining room and bonus room. All bedrooms on the second level. Covered back porch, stacked stone gas fireplace and all kitchen appliances in stainless steel. All photos are file photos of the completed 2540 plan.

This home has over 2, 600 sqft. with four bedrooms and 3.5 baths. The primary is on the main level. There is a formal dining room, and a large two story great room with stacked stone fireplace. Solid flooring throughout. The home also has a great cov

This Nice Home with large, open Kitchen/living room , a 48 x 30 Basement with Garage, and a 30 x 30 Detached garage ...is surrounded by 50 Beautiful , timbered acres! Rolling hills and mature trees set the mood for peace and tranquility! The Potentia

Great level lot with 12.14 acres. Lot fronts on Forrest Glenn Rd and backs up to new development. Buyer requires 30 days after closing to remove farm equipment. Please do not enter property without contacting listing agent or setting up showing.

A must see, beautifully landscaped fresh paint and very clean home, A lush private oasis from the screened in covered back deck! landscape is nurtured from a deep well with sprinkler system. Inside the attention to detail continues with a finished ab

Welcome home to this one of a kind all brick custom built home. This 3 bedroom 2 bath home has a wonderful open concept and has been updated. All new flooring, & paint, roof 2019, windows 2020 . Spacious living room with fireplace. Kitchen has new st

Adorable Williamson County home on an amazing lot w/ mature trees and fenced back yard! Located in the heart of Fairview across from the Rec center and next to the historic city buildings. Bedroom and office on the main with a huge primary bedroom up

Great 2 story with master down. Very open floor plan with 2 car garage. 3 bedrooms up with 2 baths and a bonus room. Optional fireplace.

Perfect building spot!!! Location is everything and this is minutes from the interstate.

Beautiful Wooded area. 2bedrooms down. Open floor plan with 3 bedrooms up and a bonus room. 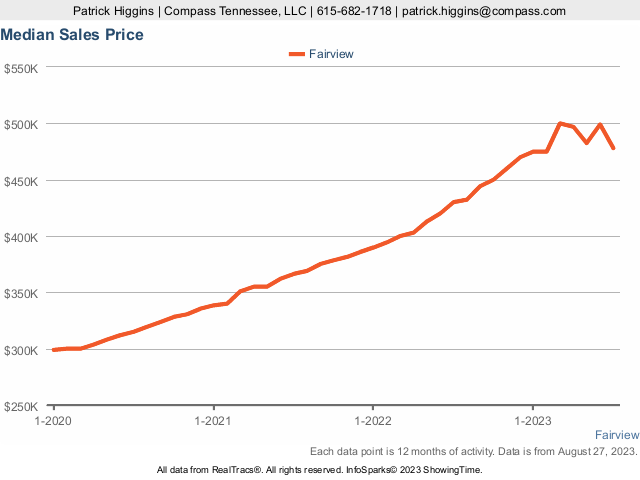 Tell Us What You Are Looking For In Fairview