Question: What Is Mount Juliet TN Most Famous For?

Answer: Mt. Juliet, TN is named after Virginia native, Martha “Patsy” Jules Brown who was the daughter of a Kentucky family that settled in Tennessee before the Revolutionary War. Patsy met and married James Brown, a Revolutionary War Captain from North Carolina. They moved to the edge of civilization (just 40 miles south of Nashville) in 1778 where they built their home on Mountain Creek near the fateful intersection where modern-day Mt. Juliet Road and Highway 72 cross paths.  Mount Juliet, Tennessee has become one of the fastest growing areas in the United States today. Its close proximity to Nashville TN, combined with the country feel of Wilson County, provides a unique residential experience. Mount Juliet offers easy access to all of its new facilities from Amazon and world class shopping.

Investors and Developers DO NOT MISS THIS ONE! Prime acreage right off of the Beckwith/I40 interchange. Future zoned mixed use commercial with endless possibilities. 270 ft. of prime road frontage.

Looking for a private in-law suite? This one-of-a-kind home w/ an Aspen Lodge vibe is for you! It's tucked back on 5 acres, creating a private retreat just minutes from all the action in popular Mt Juliet. It has a rare floor plan that offers a priva

Custom built home on 14 acres less than 5 minutes from Providence shopping area. Close to all amenities with rural and private feel. Home offers everything you would want. Buyer and Buyers agent to verify all pertinent info.

Popular and highly sought after Baird Farms in Providence! Beautiful and a perfect fit for buyers needing interior space. From the large owner's suite downstairs to the media room & open rec space, this home screams of size. The formal dining space &

**PROPERTY IS ZONED COMMERCIAL** Don't miss out on this unique property right on the main drag of Lebanon Rd in Mt. Juliet. Property was saved from destruction in 2001, and fully restored and upgraded by the current owners over the years. Basement wi

End of the Rare opportunity! Build your Private Dream Home on these 30 acres of Raw Land! Bring the four-wheelers or Let’s go Hunting. 15 Minutes from Shopping Mall, restaurants, Yacht club. No perking test or survey available. Buyers/ agent verify a

Move in ready home with a stunning open floor plan! This 4 bedroom, 3 bathroom home has a Great Room with a gas fireplace, modern Kitchen with stainless appliances (refrigerator included), granite countertops, a walk in pantry and abundant cabinet sp

Multiple offers received. Offers due by noon on Monday, Jan 24. This beautiful family home sits in a lakeside community with a large yard and huge deck that make it perfect for outdoor living! Home features a spacious bonus room over the garage and a

1.41 Acres of land on this property! 3 bedrooms and lots of potential for the basement and garage area! 20 minutes from airport and 10 minutes to Providence Marketplace. Property selling "As Is"

Question: How Much Is A House in Mount Juliet TN?

Answer: The median sales price for a single-family home in Mount Juliet TN is $470,000. 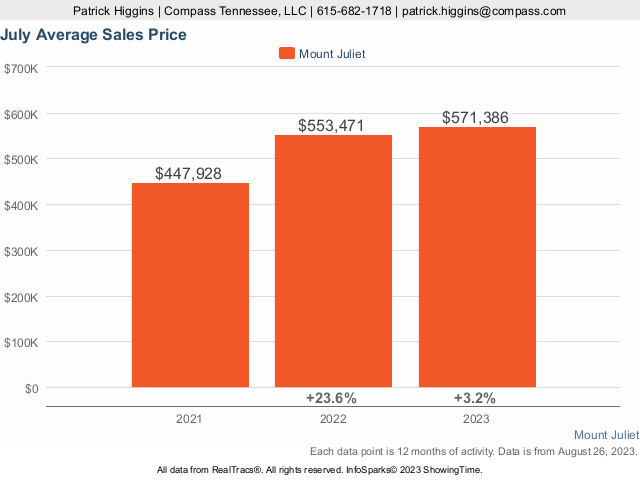